Shilajit Part Used: The Oozing from the rocks

Shilatjit Location: Himalayas, near the source of the holy Ganga river.

Systems: All, especially the urinary and nervous

Analysis of Shilajit reveals that it is high in naturally occurring minerals and elements. There is a folk saying in people who live in the Himalayan region that it makes the body strong as a rock and there some rock-like qualities in Shilajit.

Shilajit Uses: The main tridoshic immune-boosting herb (with Guduchi). A main herb for diabetes. Espiecially useful as a Vatta tonic and rejuvenative,aphrodisiac, and for the kidneys; Kidney, and gall stones,obesity,jaundice, dysuria,cystitis,edema, hemorrhoids, sexual debility,menstrual disorders, asthma,epilepsy, insanity, skin diseases,parasites heal broken bones, mental work. Of The varieties of shilajit, the black is used for healing. Although it is expensive in comparison to herbs, it can heal most diseases.

Shilajit Production:  In the Himalayan region known as Gangotri (the northen region of the Ganga river), Shilajit drips from the rocks. In other areas, foot-long scorpions sting the rocks. The poison from their stingers cause the shilajit to ooze from the stones. In still other places, it appears in coagulated form. Monkeys use this natural remedy for various health ailments. They stay healthy and live a long time

Shilajit Precaution: Do not use with high uric acid count, or with febrile diseases.

Shilajit, also known as silajit, salajeet or mumijo, momia and moomiyo[1] is a thick, sticky tar-like substance with a colour ranging from white to dark brown (the latter is more common), sometimes found in Caucasus mountains, Altai Mountains, and Tibet mountains and mountains of Gilgit Baltistan Pakistan.[2] 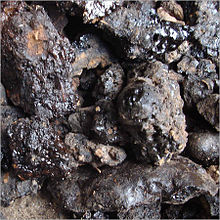 Shilajit is a blackish-brown exudation, of variable consistency, obtained from steep rocks of different formations found in the Himalayas

It is used in Ayurveda, the traditional Indian system of medicine. The composition of shilajit has been investigated numerous times in both India and the former USSR, and depends on the location where it is found. It has been reported to contain at least 85 minerals inionic form, as well as triterpenes, humic acid and fulvic acid.[3][4][5] A similar substance from the Caucasus Mountains, and the Altai Mountains is called mumijo (Russian).[6]

Shilajit is a Sanskrit word meaning “rock-invincible.” It is also spelled “shilajeet,” and “salajeet(سلاجیت)” in Urdu and is known by various other names, such as shilajita mumiyo, mineral pitch or mineral wax in English, black asphaltum, Asphaltum punjabianum in Latin, barahshin, dorobi, baraga shun or brag-shun, chao-tong, and wu ling zhi (which generally refers to the excrement of flying squirrels). Shilajit is commonly called shilajitu in Ayurveda.The wakhis call it “baad-a-ghee”(evils feces).

Mumijo is a word of Greek origin. The substance is mentioned in the works of Aristotle and Avicenna as a remedy with antiseptic and general stimulant properties used in Caucasus mountains. Most scientists agree that people observed wounded animals frequenting caves with mumijo and so discovered the substance. Similar substances are used for medicinal purposes throughout Tibet.[1]

Shilajit is a substance mainly found in the Altai, Himalaya, and Caucasus mountains of Central Asia. The colour range varies from a yellowish brown to pitch-black, depending on composition. An ancient Ayurvedic text, called the Charaka Samhita, states that there is no curable disease in the universe, which is not effectively cured by shilajit when it is administered at the appropriate time, in combination with suitable drugs and by adopting the prescribed method.[7] For use in Ayurvedic medicine the black variant is considered the most potent. Shilajit has been described as ‘mineral oil’, ‘stone oil’ or ‘rock sweat’, as it seeps from cracks in mountains due mostly to the warmth of the sun. There are many local legends and stories about its origin, use and properties, often wildly exaggerated. It should not be confused with ozokerite, also a humic substance, similar in appearance, but apparently without medicinal qualities. Some marketers of dietary supplements pretend to sell mumijo, while in fact they are offering cheap raw ozokerite, a substance used, for example, in cosmetics.[8] Genuine mumijo/shilajit should melt in the hand and has a distinct smell of bitumen, whereas ozokerite melts at 164-169 °F/73.3-76.1 °C.

Once cleaned of impurities and extracted, shilajit is a homogeneous brown-black paste-like substance, with a glossy surface, a peculiar smell and bitter taste. Dry shilajit density ranges from 1.1 to 1.8 g/cm3. It has a plastic-like behavior, at a temperature lower than 20°C/68°F it will solidify and will soften when warmed. It easily dissolves in water without leaving any residue, and it will soften when worked between the fingers. Purified shilajit has an unlimited shelf life.

It is still unclear whether shilajit has a geological or biological origin as it has numerous traces of vitamins and amino acids. A mumijo-like substance from Antarctica was found to contain glycerol derivatives and was also believed to have medicinal properties.[9]

Mumio has a wide spectrum of pharmacological activity. But, despite decades of impressive research results, official medicine is familiar with it only as food additive. Mumio is a unique plant extract with dozens of minerals; six amino-acids; vitamins A, B , C and P (citrins), natural steroids, terpiniods, phospholipids and polyphenol complexes. MUMIO contains trace and macro-elements (cobalt, nickel, copper, zinc, manganese, chromium, iron, sodium, potassium,magnesium, and others).